“After nearly a month of investigations into the bombing, which killed 20 people, the Thai authorities have arrested two suspects and issued arrest warrants for a dozen more people. But the comments on Tuesday, made at a daily briefing, were the first time that investigators were explicit about whom they believe perpetrated the attack and why.”

“Gen. Somyot Poompanmoung, the chief of police, said the bombing was carried out by a human trafficking network that “moved Uighurs from one place to another.”

“He said the bombing was a retaliation. “Put simply, we destroyed their business,” he said.”

“Local news outlets have speculated for weeks that the attack was a response to the Thai government’s repatriation in July of more than 100 ethnic Uighurs to China. Human rights groups, foreign governments and activists criticized the move, saying the Uighurs were likely to face persecution on their return.”  (Coordination Center) 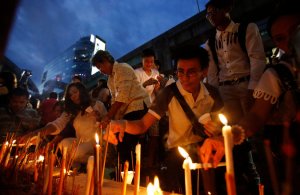