NEC-SE has stated during multiple interviews and in many articles that until the U.S. finds allies who are similar in philosophy, values, and thinking, it will continue to spend money on groups that will not represent its interests in the region and will continue to embarrass the DOD and DoS representatives who have to work alongside these groups.

The article states:  “US-backed Kurdish forces have forcefully displaced thousands of Syrian civilians, mostly Arabs, and demolished villages in northern Syria, often in retaliation for the residents’ perceived sympathies for Islamic State and other militants, Amnesty International has said.”
“Amnesty said its findings were based on visits to 14 towns and villages in the provinces of Hassakeh and Raqqa this summer, areas under Kurdish control. It said the abuses amount to war crimes.”

“The rights group said at least two villages were entirely demolished. In at least eight other villages, the residents were forced to leave and were sometimes threatened with being shot or targeted in US airstrikes. It said the victims were mainly Arab, but also included Turkmens and other Kurds.” 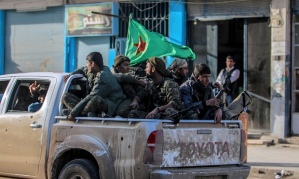